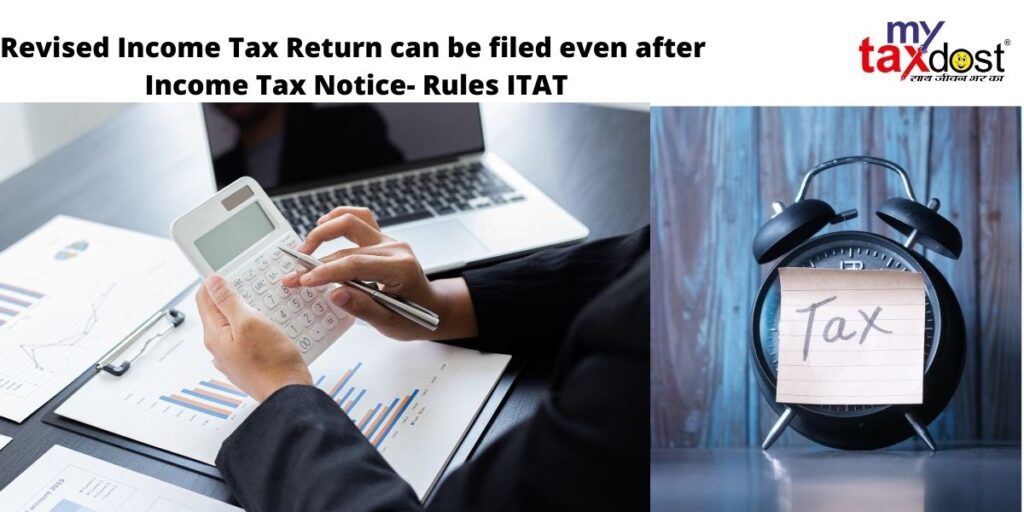 It has been always a point of discontent between Tax paper and Tax official, up to which period return can be revised by the taxpayer.

As per Section 139(5), “If any person, having furnished a return under sub-section (1) or sub-section (4), discovers any omission or any wrong statement therein, he may furnish a revised return at any time before the end of the relevant assessment year or before the completion of the assessment, whichever is earlier”

An important point, will Tax Notice will constitute completion of the Assessment?

Mumbai Bench of ITAT (Income Tax Appellate Tribunal) has ruled in the case of Mahesh Hinduja, which will provide relief to several Taxpayers. ITAT said in his ruling that “A Tax benefit claim by Taxpayer/Assess in his revised income Tax return cannot be denied outright by an Income Tax officer merely because the revised Return was filed after the issue of Notice. The Revised return needs to be filled within the time limits as per Income Tax Act 1961”

As per Income Tax Act, If Assess has made an investment in another home/Flat in India within the time frame recommended in the act, the Assess can claim deduction under Sec 54, if the amount of capital gain is equal to or less than the cost of the new house, then entire Long Term Capital Gain is not Taxable.

A reader can refer to our Book- CAPITAL GAIN TAX- on Sale of Real State for detail information.

Mahesh Hinduja has filed a revised return after receiving a notice under section 143(2). The Income Tax official rejected his claim for deduction under Section 54 and raised demand.

ITAT observed that “Income Tax Official has adopted a very selective approved; only the deduction claim under section 54 had been rejected. This is against the law of natural justice”

This is a beneficial decision for the taxpayer facing the same issue.